The 5.7 litre Vortec engine is one of the most capable engines in the Vortec lineup for General Motor trucks including the Chevrolet C/K and the GMC Yukon. When it comes to dependability and reliability, the engine ranks high especially for an engine built in the 1900s.

This 5.7 Vortec Engine Diagram reveals the components of the engine giving you the details of its working system. 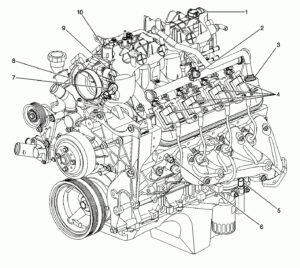 About the 5.7 Vortec Engine

The 5.7L 5700 L31 engine as it is called was produced from 1996 to 2002. This engine was considered the king of the Vortec small block engine during 1997. The V-8 engine featured an overhead valve configuration with two valves per cylinder. The truck engine had components that were compatible with smaller engines in the Chevy first-generation small-block family.

While powerful and dependable, the 5.7 Vortec engine is not free from problems. Being an older engine means you will encounter some issues that have been improved in newer models.

Though not so common, you could have to deal with this sometimes in the lifespan of the engine. Piston ring seals sit within the piston head and seal together the cylinder wall and the piston. The seals maintain the compression of the cylinder while reducing blow-by to help keep the combustion chamber free of oil.

With continuous use, the ring seal will go bad which will lead to excess consumption of oil by the engine. You can notice this when the engine starts to consume more oil than usual or emits blue smoke from the exhaust. You could also notice rough idling and poor performance. Bad ring seals can be fixed by replacing the seals, however, this means you will have to take the engine apart which can be quite expensive.

The water pump is an important component in the 5.7 Vortec engine cooling system. The water pump is necessary for circulating coolant throughout the engine to prevent overheating. You might have to deal with an entire water pump failure or just water pump leaks.

The water pump shaft is the common failure point for the pump itself, though you need to watch out for the water pump gasket as it is a common leak spot. Gaskets naturally wear down with time and when this happens, they will start dripping coolant into the belts. This will limit the coolant going to the engine leading to overheating.

With a gasket leak, simply replacing the gasket will solve the problem. However, if the water pump is up to age, then you should consider replacing the pump as well.

Then the lifter comes down while the pushrod is out of alignment causing it to bend. This can cause the piston to run into valves especially when the pushrod bends too much or snaps. The end result is serious internal engine damage. They can also rub against the guide holes of the cylinder head which will wear down the head and lead to a cracked head.

When these start to happen, you will notice a ticking noise from the engine, poor idling, or cylinder misfires. If you notice that your pushrods are bent after a vehicle inspection, it is recommended that you replace them immediately to prevent significant engine damage.

Pushrods aren’t really expensive to replace and in most cases, you will only have to replace the pushrods only. In other cases, the valves and piston will have to be replaced especially if the rod snaps. Due to these reasons, getting the pushrod replaced even if you notice only a slight bend is highly recommended.