In this article, you will find a detailed 6.6L Duramax engine diagram that will give you insight into the engine’s components and what gives it the raw power we have come to trust for many years. We will also take you down memory lane and through the history of the engine, its specifications, as well as some common problems that you’re likely to encounter with older models. 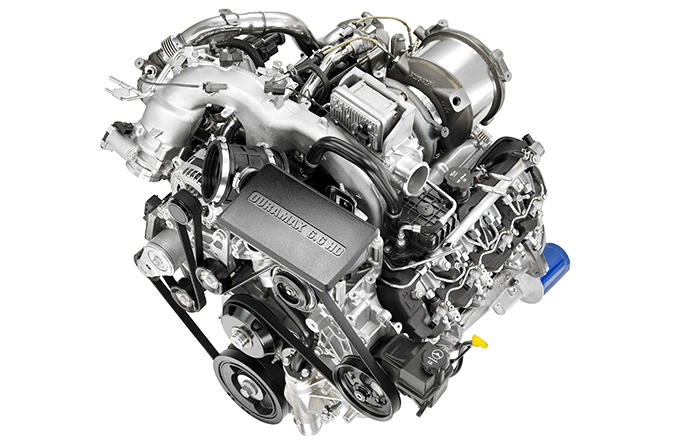 About the 6.6L Duramax Engine

First introduced in 2001, the Duramax 6.6L V-8 Turbo-Diesel engines have gone through several years of improvements to become as capable as they are today. Duramax engines are produced by Ohio-located diesel manufacturer DMAX and designed by General Motors.

The genius idea behind Duramax’s design was to build a diesel engine that could take up the same spaces as a typical gasoline engine in a full-size pickup truck. The first Duramax engine, the LB7 sported a 32-valve design with 4 valves per cylinder. It also weighed 835 lbs and was about 30x30x32″. Even several decades after the LB7 was discontinued, GM continued to use the same size/weight

The Duramax diesel engine is susceptible to air getting in the fuel lines which could be due to the fuel filter housing design and a lack of a lift pump in the design. Instead, a higher pressure fuel pump is responsible for vacuuming fuel from the tank. Due to this design, the fuel filter housing is more likely to develop a small crack or allow air to seep in due to a water-in-fuel sensor o-ring or bad housing o-ring.

It is quite difficult to prime the fuel system once the air has entered the system even when the fuel filter is changed. This problem is most common in the first Duramax engine, the LB7.

Overheating issues are more like a hit-or-miss problem with Duramax engines. You might be one of those lucky owners that will never experience it or you might fall into the category that has to deal with it. Overheating is more likely to occur while towing in the summer months and is more prevalent in Duramax LLY and LB7 engines produced in 2005 and earlier.

The latter versions received a fan and radiator to deal with this problem. Overheating could occur as a result of a fan clutch failure that impedes the ability of the engine fan to provide supplemental airflow needed to keep the engine from overheating. If you notice this problem, you should also check for a dirty/clogged radiator and water pump failure (the latter is more common).

The Duramax LB7 has a serious problem of premature injector failure which was corrected with an updated injector design and an extended warranty on the new injector design. This means you’re less likely to experience injection failure if you’re going for a new Duramax engine.

However, if you’re buying a used truck, there are chances that the engine does not come with the new injector design. While the latest Duramax engines are less prone to injector failure, Duramax injectors, in general, seem quite sensitive to contamination and will fail if you skip regular maintenance checks.

Once again, the Duramax engine has a problem that has to do more with its design. The Duramax PCV design vents the crankcase pressure into the intake. The by-product of the process introduces engine oil into the turbocharger.

With continuous use, this engine oil coats the interior of the intercooler and the intercooler tubing. The presence of large quantities of oil settled in the intercooler boots will cause them to rapidly degrade. This is one o the few problems with Duramax engines that has an easy fix. You can get aftermarket products that will reroute the PCV line so that it vents into the atmosphere instead of into the intake.

While this fail-safe comes in handy, it does activate when it is no needed. It could occur under heavy load and is common in tuned trucks. It is also possible for the transmission to slip in high gear and be forced in 3rd gear immediately causing a spike in engine speed. To take the transmission out of limp mode, you will have to clear the engine trouble codes using a scan tool. You could also turn the engine off and cycling the key to the on position several times to take the transmission out of limp mode. However, if your transmission experiences a limp mode, you will need to prep for a rebuild in the near future.

The Duramax LML was launched in 2011 featuring a sophisticated emission system that included a selective catalyst reduction (SCR) system. This system requires a constant supply of diesel exhaust fluid (DEF) to inhibit the reaction that converts nitrous oxides into more impregnable compounds.

It relies on sensors plumbed into the exhaust system to accurately control the injection of the fluid into the catalyst. While it sounds sophisticated, the system comes littered with problems, most which were corrected in the next model. The most common problem of the system was the failure of two NOx sensors.  There were also issues with the DEF pumps, DEF level sensors, and DEF tank heaters.