The Chevy 350-cubic-inch engine was the most popular engine by General Motors and while it is no longer produced for new GM cars and trucks, it can be purchased as a replacement engine. With this Chevy 305 Engine Diagram and troubleshooting guide, you should be able to install and fix any issues you will ever have with this engine. 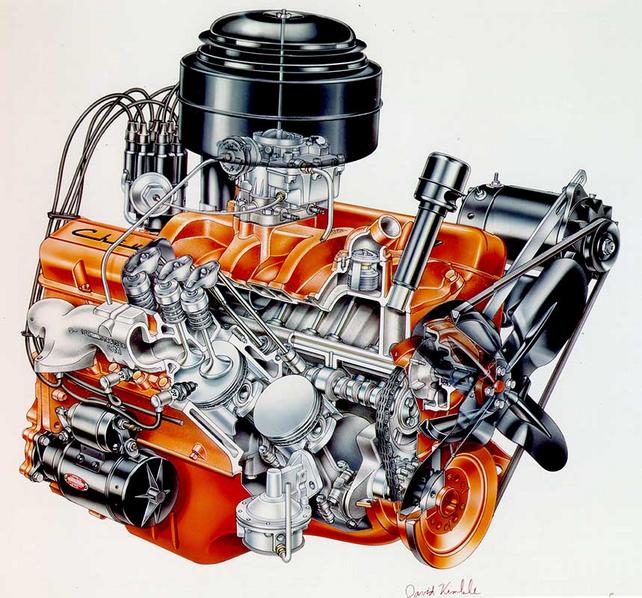 About the Chevy 350 Engine

The Chevy 350 is considered one of the best engines of the 20th century due to its durability, quiet operation, and performance which has earned it a reputation for usability in many applications including boats.

If your Chevy 350 engine is not starting, you might be dealing with a spark plug problem or low on fuel. If the problem is not with the ignition or fuel, you could go on to check for electrical and/or mechanical problems

You can check for a fuel problem by spraying carburetor cleaner into the carburetor. When done, start the vehicle. If it starts, then you have confirmed that there is no fuel problem, you can go ahead with other checks.

If you see a spark, then the ignition is working fine. If not, go ahead to remove the distributor cap to check if the rotor is worn. Using a feeler gauge, make sure that the points are properly adjusted. You can use a matchbook cover to check points for the engine.

The Chevy 350 usually has a problem starting in cold weather, especially with temperatures near freezing. If the 350 engine fails to start, the problem could be due to the automatic choke being in the closed position. The closed choke can be determined through the smell of gasoline from the engine compartment. The air cleaner must be removed and the choke plate inspected to ensure that it is swiveling to open and close.

Chevy 350s that have been sitting for a long period could develop a tapping or clicking sound once the engine is running. The reason for this could be due to the oil galleys being blocked or restricted. It could also be due to low oil pressure. The galleys should be cleared and the oil pump should be replaced. Aftermarket oil pumps are quite better than the standard older versions and generate about 60 to 80 psi when in use.