The Ford 3.0 V6 Duratec Engine gives you a detailed look at the inner components of the engine as well as its structure. This should help you in making repairs, servicing, or upgrading the engine if you’re looking for more horsepower to meet your driving needs. 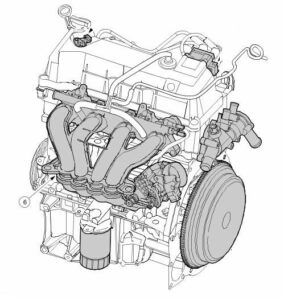 About the Ford Duratec 3.0 V6 Engine

The Ford Duratec 3.0 V6 is an aluminum DOHC V6 engine first introduced in 1993 with the Ford Mondeo. The engine features a 3.0 L (2.967 cc) displacement and produces between 200 hp and 240 hp. The engine has appeared in many Ford vehicles including the Lincoln LS, Jaguar S-Type, Mazda MPV, Mondeo ST220, and Mazda6.

The engine features an aluminum engine block and aluminum DOHC cylinder heads. The cylinders of the engine are lined with cast iron with 4 valves per cylinder. It utilizes sequential fuel injection and fracture-split forged powder metal connection rods and an assembled cast aluminum intake manifold.

The Ford 3.0 V6 Duractec engine is a very reliable engine that won’t give many problems with proper maintenance. However, if you find yourself missing oil changes and recommended servicing checks, then you may have to deal with these engine problems.

Water pump failure is a big problem that could lead to overheating of the engine. The way this happens in the 3.0 engine is quite different from other engines. The impellers could be corroded and deteriorate to the point where they can no longer circulate coolant effectively.

When this happens, the coolant would become heavy with metal, stagnate, and boil over when the engine overheats. If the coolant boils out of the system too quickly, the temperature sensor will not be able to read the changes thus the temperature gauge will not be able to respond which will lead to catastrophic engine failure. While this problem is serious, it is usually hard to detect.

The only sign of this type of water pump failure is rust-colored coolant. The coolant that is normally green liquid would become brown. This indicates that the water pump impellers are rusting. In some cases, the metal pieces will clog the heater core, leading to a lack of heat in the cabin which will result in a costly heater replacement. If you’re able to notice the brown coolant, it is recommended you change it immediately and get the engine and cooling system inspected.

Overheating problems can happen in any engine. This problem is mostly due to the failure of one or several components of the engine’s cooling system. Overheating could be caused by a cooling fan failure, blown head gasket, and thermostat failure. This is a very serious problem as such overheating conditions could lead to engine damage. A problem like a blown gasket head can be fixed with a visit to the auto repair shop. You could also get the thermostat replaced and the cooling fan fixed.

This failure is not common in the Duratec 3.0 engine and is mainly due to a lack of maintenance. Oil leaks can be problematic as the engine needs the lubricant to curtail the effects of friction on its moving parts. Without adequate oil, the engine will get damaged and have to be rebuilt or repaired. You can notice oil leak problems by checking the rear crankshaft main seal, front crankshaft seal, and valve cover gaskets. Oil leaks are more common in these areas due to viscosity breakdown of the oil and sludge build-up.

The timing chain tensioners will wear down normally but this will take a long while. With time, the chains could get loose and the guide materials may fall into the crankcase and clog it. This will lead to engine failure due to oil starvation of all components including the camshafts. When this happens, the engine would have to be rebuilt or replaced. The engine could be salvaged before the timing chain tension fails and the timing chain breaks or the engine will fail completely and would require a complete engine overhaul to work.

Misfires are not usually a call for concern but if you notice a misfire that triggers the check engine light and the P0300 code, then you should inspect the engine for faults. P0306 fault codes are commonly due to failure of either the COPs (coil on plugs) or the spark plugs themselves. If you confirm that problem is due to a COP failure, it is recommended that you replace the COP and spark plug at the same time.

Engine noises could be due to the wearing of the timing chain and tensioner hardware. This could be prevented with proper maintenance. There are also a bunch of other reasons why your engine could be making a weird sound. If you notice some rattling or anything out of the ordinary, you should have the car checked out immediately.