The Troy Bilt Pony 42 deck belt is designed to connect the crankshaft to the lawn mower blade and cause them to turn. If you notice a problem with your mower blades or the deck belt, you might need the setup diagram to help you put things in order.

In this piece, you will find the Troy Bilt Pony 42 Deck Belt Diagram as well as a helpful guide on how to remove and install your mower belts. 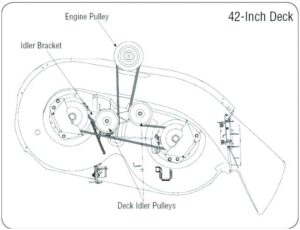 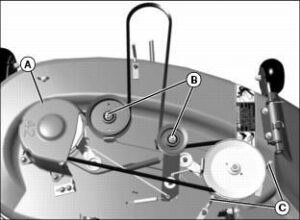 How to Replace a Troy Bilt Pony 42 Deck Belt

Replacing the drive belt on a Troy-Bilt Pony lawn is a simple process that won’t require the assistance of a technician. If you’re having any issues with following this guide, then you should consult your manual for further assistance.

Before you can get to the drive belt, you will have to take apart the deck. Also, make sure the mower is off and parked.

Engage the parking brake to release tension from the belts and make it easier for you to remove them.

Causes of a Belt Coming Off a Riding Mower

There are several reasons why your drive belt may come off your riding mower. With a safety check, you should be able to narrow down the causes and fix the [problem. Take note that when performing a safety check, you should always ensure that the engine is cool, wear your gloves and goggles, remove the spark plug wire or wires, and ground them so that the motor won’t accidentally start as you check the mower.

Below are some of the causes and areas you can check.

When a riding mower’s mounting system is off balance or not properly balanced, it can affect how the mowing deck hangs or cause it to hand unevenly. This will affect the drive belt’s operation and cause the belt to come off during use. While inspecting the mower, check if the deck is mounted properly. Also, check for missing parts and ensure that the clip pins are in place in the rear hangers. Another area to confirm is that the draft rod joining the mower’s front to the front axle is connected.

The drive belt of a mower will wear down with continuous use but that won’t happen until the mower has been in use for a long while. When the belt gets damaged or loose, it becomes a problem even if it doesn’t fall off. A loose mower belt may slip resulting in friction which can create too much heat and cause a fire in the mower’s engine.

If the belt is broken or worn, it can break while the engine is running and fly off at a great speed which could lead to injuries. If you notice that your belt is coming off, then you should check it for looseness, cracks,  or separation and replace it if necessary.

If other parts of the mower are damaged, it could cause the drive belt to come off repeatedly. This is possible if the drive pulley and idler pulleys are not clean or in proper working order. Under normal conditions, the moveable arm should be swinging freely without obstruction and the blade spindle should turn freely as well. Also, if the mower deck slants are not properly adjusted, it could cause the belt to come off.

The buildup of debris in the mower can interfere with the normal belt operation. This could be due to excessive grass clippings as well as soil lodging anywhere along the drive belt. If this happens, it could cause the belt to slip or malfunction which could lead to mower problems. This is actually very easy to prevent. After each use, inspect the mower and remove any debris you can find, then clean the belt with a cloth.